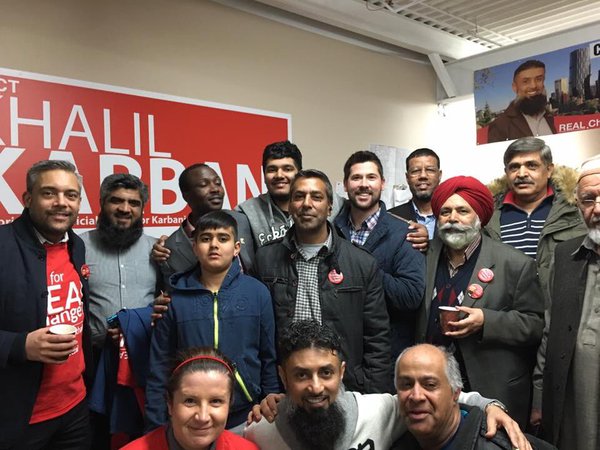 Mr Karbani has lived in both London, England and Calgary, and has a vast global experience both on a work and volunteer basis. He was a partner in a very successful business that he started from the ground up becoming a leading UK foreign car parts dealership. He was the first to introduce “on-line mail order car parts” in the UK.

He emigrated to Canada in 2001 with his wife and 4 children, and started his own business in developing residential homes. He then moved on to building commercial units and warehouses. He has been involved in many projects in and around the NE of Calgary. He started volunteering with the Taradale Community Association in 2003 and has been President since 2005. In 2013 he received the Queen's Diamond Jubilee Award medal for outstanding volunteer work.

He has also volunteered his time with the Muslim Council of Calgary (2013 – 2015) where he was the Chair of Events and Communications. He organized and set up the Eid gatherings at the Stampede Round-Up Centre. He was also involved in the Airport Trail Access Committee (2009 – 2012), which was instrumental in bringing economic growth to the NE of Calgary. Highlights include the development of the Airport Tunnel.

He and his siblings also started a charity in the UK after tragedy struck their family. They turned their loss into a successful charity that helps orphans, widows and underprivileged communities in India, Uganda, Zimbabwe, and Pakistan. From 2003 – 2006 he volunteered at the Bowden Penitentiary as part of a support group to help inmates.

His interest in politics stems from the last several years. He has always been involved in his community and wants to make it a better place.

Khalil Karbani says: “The next step in working for my community is running for political office to represent and be accountable to my local constituents. I believe in the values of the Liberal Party - I believe in a democracy that cares about the economy, equality, education, health care, seniors, and the environment. I believe in being accountable and totally transparent, and I would be honoured to be the MLA for Calgary Greenway. I have been working for my community and for Liberal values for many years, but now I want to take my commitment to the next level”.

KHALIL KARBANI WILL WORK FOR YOU, YOUR JOBS AND YOUR COMMUNITY

JOBS: The PCs reliance on the oil and gas sector over the last 40 years without investing for the future has hurt Alberta.  I will press the government to make it easier for other industries to grow in Alberta so that we can be on more stable economic footing tomorrow and get people back to work today.  Promoting our agriculture and forestry sectors, our information technology sector, and our world-renowned tourist sites will allow Alberta to grow for generations to come.

IMMIGRATION: I know what it is like being an immigrant and needing to start from scratch.  With the rest of the Alberta Liberal team, I will promote job retraining and work to speed up foreign accreditation recognition.  If you have already have the proper training and experience, you should be able to work here.

TAXES: Small businesses are some of the biggest job creators in the riding. I will work to eliminate the small business tax which will allow business owners to use their own money to invest in themselves and not be forced to take out high interest loans.

INFRASTRUCTURE: Just saying that we will invest in infrastructure is not good enough.  Targeted infrastructure investments, like how we built the Airport Tunnel, will put people back to work and grow our communities.  Let us improve our roads, our schools, and our transit.  And let us finally break ground on a new seniors centre in the North East.

COMMUNITY SERVICES: We need more say in the way services are delivered in our riding. Instead of the government dictating what a community needs, I will ensure that the communities have a voice at the table and get the resources that they need, not what politicians think will help them win reelection.

COMMUNITY SAFETY: Community partnerships with police and other emergency services lead to safer communities.  As your MLA, I will advocate for more community centres and better programs to keep youth engaged and off the streets.  I am proud that my contributions to getting the Genesis Centre built have lead to a safer community here in Greenway and I will continue to promote this model for other communities across the province.